They are dangerous places to explore and you will want to prepare yourself before visiting one!

The buildings are made from an underwater stone called Prismarine and are lit in places by Sea Lanterns.

There is a central section and two wings, with a number of rooms. In the central section is the Treasure Chamber, where gold blocks can be found if you dig away the Dark Prismarine. 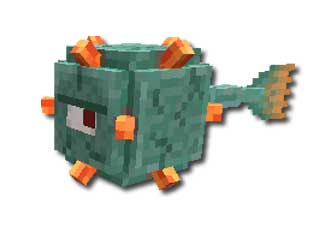 Ocean Monuments are inhabited by dangerous fish-like creatures called Guardians. These underwater mobs will attack you with a kind of laser beam. They also have spikes, which can damage any player who is attacking them.

These Guardians are very aggressive and will attack any players (or squid!) who come near them. 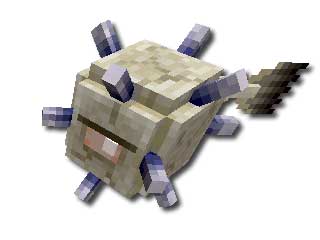 Each Ocean Monument is also guarded by three Elder Guardians. This, more powerful version of the Guardian is bigger. stronger and nastier than the ordinary kind. In addition to the spines and beam attack, it casts a spell called “Mining Fatigue” that makes it harder for you to break blocks. This means you will have to defeat the Elder Guardians before you can get to the treasure.

Fighting the Guardians is difficult, because the water will slow you down when you try to attack with a sword, and arrows don’t work very well under water. Try to get as close as you can and attack with a bow or a sword. See below for some ideas on what equipment will help you.

When a Guardian is targeting you with its beam attack, you will see the beam and a stream of bubbles pointing towards you. It will take a few seconds to charge before damaging you: try to get out of its line of sight by ducking around a corner or behind a block, and you can avoid taking damage.

It is possible to attack a Guardian with a bow and arrow and duck back into shelter before the beam charges, but you will have to be quite close to the guardian for this to work.

With all those Guardians, an Ocean Monument looks like a dangerous place! So why would you go there?

Gold
The Treasure Chamber of each Ocean Monument contains 8 gold blocks, hidden behind Dark Prismarine.
Prismarine
Prismarine itself is only found in Ocean Monuments, so if you want to use it in your own buildings, you have to take it from here.
Sea Lanterns
Sea Lanterns are useful light sources for underwater structures. You can collect them using a tool enchanted with Silk Touch, otherwise they will break and you will only get Prismarine Crystals.
Prismarine Shards and Prismarine Crystals
These are sometimes dropped by the Guardians when you killed them. These items are used in crafting Sea Lanterns, Prismarine Bricks and Dark Prismarines.
Sponges
Sponges can be found in Ocean Monuments, either in rooms where they are attached to the ceiling, or dropped by the Elder Guardians.

Before you go in search of Ocean Monuments you will need to be properly prepared.

You will need good armour, ideally a full set of Diamond armour. Certain enchantments will make your adventure much easier:

Helmet enchantments
Respiration will be incredibly useful, as it will increase the amount of time you can last without breating.
Boot enchantments
Depth Strider will allow you to move more easily underwater. This will help you get close enough to the Guardians to attack them.

Guardians are hard to fight, as the water will slow you down when you try to attack with a sword, and arrows don’t work very well under water. Bring your best sword and bow, and hope for the best!

Potion of Night Vision
This potion allows you to see under water, and will make it a lot easier to find an Ocean Monument in the first place! Once you have found
Potion of Water Breathing
It’s obvious how helpful these can be! Bring as many as you can.
Potion of Swiftness
This might help you to get closer to the Guardians and dodge away from their beam attacks.
Potion of Invisibility
this can help you avoid the Guardians’ attacks.

Torches
If you run out of air you can escape from drowning by placing a torch on the wall right next to you. It will fall off immediately, but just for a moment there will be an air pocket that will let you restore your oxygen level.
Signs or Ladders
When you place one of these against a wall, you will get a block of air, useful to create a breathing space or to put in doorways when you have cleared the water from a room.
Fence posts or glass panes
These can also be used to create an air pocket to let you breathe.
Glowstone
This light source will work under water.
Enchanted Tools
Silk Touch enchantment will allow you to collect Sea Lanterns. If you don’t have that, a Fortune enchantment will at least let you get more Prismarine Crystals when you break one.