Version 1.2 of Minecraft, expected to be relased March 1, 2012, has a number of new game features and technical refinements.

The giant jungle trees drop a new type of wood, with a different texture that looks great for building log cabins.

The saplings from jungle trees are also new; if you plant four of them in a square and fertilise one with bonemeal, you can grow your own giant jungle tree anywhere you like.

Jungle biomes are festooned with vines, which can be climbed just like ladders. You can harvest vines with shears, and then place them on most vertical surfaces such as wood and stone, where they will grow to cover the structure. Swamp biomes also contain vines, which are also now climbable.

Ocelots are a type of spotted cat which you may find in jungle biomes. They're very shy and will run away from any sudden movement!

If you have fish in your hand, ocelots will approach you, and if you feed them the fish they may turn into tame cats.

Cats behave somewhat like tame wolves: they will follow you around and get in your way unless you right click on them to make them sit. Even cats that have been parked this way if you are nearby and enter combat with a hostile mob. Unlike wolves, however, cats don't help you fight, they just get in the way again.

Creepers, however, are afraid of cats.

Villages are becoming much more fun than in previous versions of the game.

Villagers have learned to open and close doors. They leave their houses during the day, and return at night.

Villagers will have babes if there is spare living space in the village. You can't breed them like animals by feeding them, but if you build extra houses for them, their population will expand. A 'house' is pretty much any structure with a door (the door is essential).

The villagers are not entirely unprotected! They are now defended by Iron Golems!

You can make an Iron Golem yourself, from 4 Blocks of Iron and a Pumpkin.

It will spring to life the moment you put the pumpkin on! 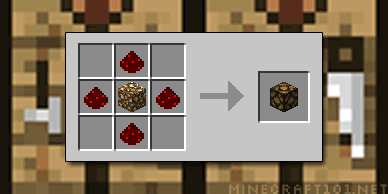 These lamps are activated by supplying a redstone signal. The easiest way to do this is to attach a Lever to the lamp or to an adjacent block.

New ways to use building blocks

Stairs and slabs can now be applied to the underside of blocks, to decorate ceilings and make nice decorative corners. Try it out!

New Information if you press F3

The debugging screen that you can use to tell your coordinates has a new line of information:

This information may be useful: it tells you what biome you're in (maybe useful underground!) and "bl" and "rl" are two measures of your light level ("block lightness" and "raw lightness" respectively). These are probably useful for checking that areas are well-enogh lit to prevent mobs from spawning.

Under The Hood Changes

These are changes to the workings of the game, that may affect some players.

The way that Minecraft stores saved games is changing, to allow more information to be stored. The new format has the code name 'Anvil'.

If you were using tools such as world editors or mapping programs, these will need to be updated to work with the new format. It's a major update and may take some time.

The way biome information is stored is changing. This means that, going forward, your biomes should no longer go crazy when the game is upgraded.

Mojang has hired a new developer who specialises in artificial intelligence: all mobs will be behaving differently than before.